From Richard MacDonald, Heritage Stories Maker at The Reader

Sometimes you literally don’t know what’s beneath your feet.  When it comes to moving a prehistoric monument information like that is vital.

The stones (click here to find out more about them and their history) are to be lifted and taken away for conservation before returning to the park as a centrepiece of a multi-million restoration of Calderstones Mansion supported by the Heritage Lottery Fund. You can read more about that here.

We know the Calderstones were placed in the greenhouse (otherwise known as the vestibule) of the old Botanic Gardens at Calderstones Park in 1964. 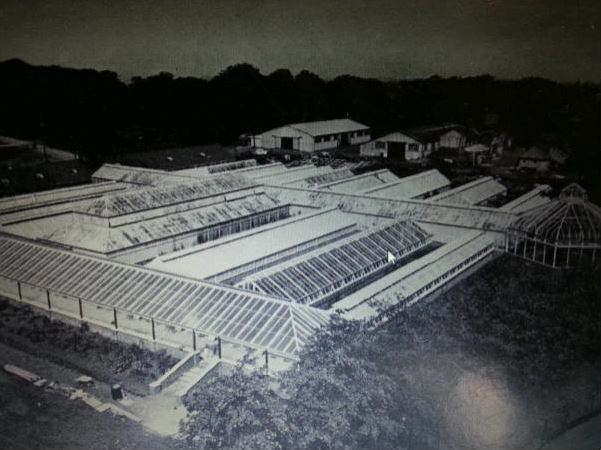 We know (from photos, like the one below) they were lifted using ropes and a crane on the back of a flatbed truck.

However; we don’t know how they were placed in the ground.

Were they in any sort of protective casing?

Were they placed straight into the ground, or in concrete?

If so, were they just placed into the wet concrete or did they have specific purpose designed cradles or bases built?

All these questions need answers before anyone can even begin to work out the logistics of moving the stones.

To find some of the answers on Thursday 3rd February a team of volunteers led by archaeologists from the Museum of Liverpool carried out some exploratory work to see if we could find how the Calderstones were sited in the ground. 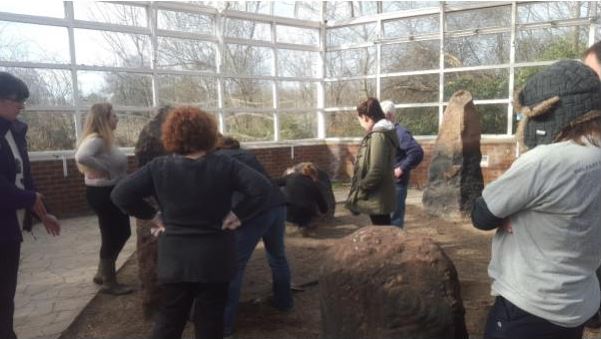 Wheelbarrows, buckets, shovels, trowels, scoops and brushes were all ready to be deployed as a strong team of volunteers appeared to help with the task.

Breath was baited as the first spade entered the ground in the middle of the Calderstones circle. The blade slid through the pea-gravel, first an inch, then 6-inches and soon the entire blade had sunk into the ground.

Quickly a small hole about a foot deep and a foot wide was dug. No sign of concrete… yet.

Someone suggested we may have wasted our time if there was no concrete. But a gentle pull of the gravel around the base of stone E showed that just a few inches beneath the surface – bingo! Concrete. 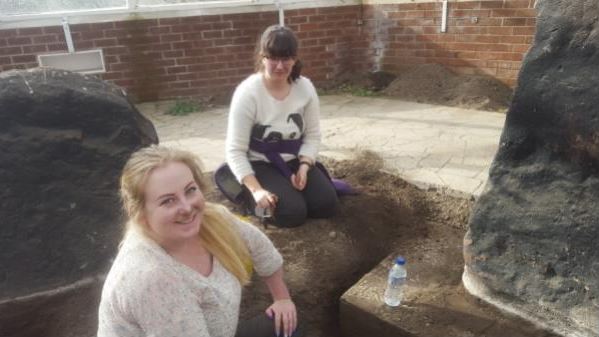 Work began in earnest and over the next two hours from beneath the dry half-century old gravel and through the ensuing clouds of dust that were thrown up by eager trowels and brushes, one by one the concrete bases appeared. One… Two…. Three… Four… … …

Four. Only four. A foot of digging down and only four of the stones appeared to have bases.

What does this mean? Do stones D & C have no bases? Are they simple placed into the soil?

How will this affect moving them? Will they need extra security and packaging?

Will we ever get to the bottom of The Calderstones…?

…You’ll have to stay with us over the next few months to find out if we get any closer to discovering the secrets of the stones.